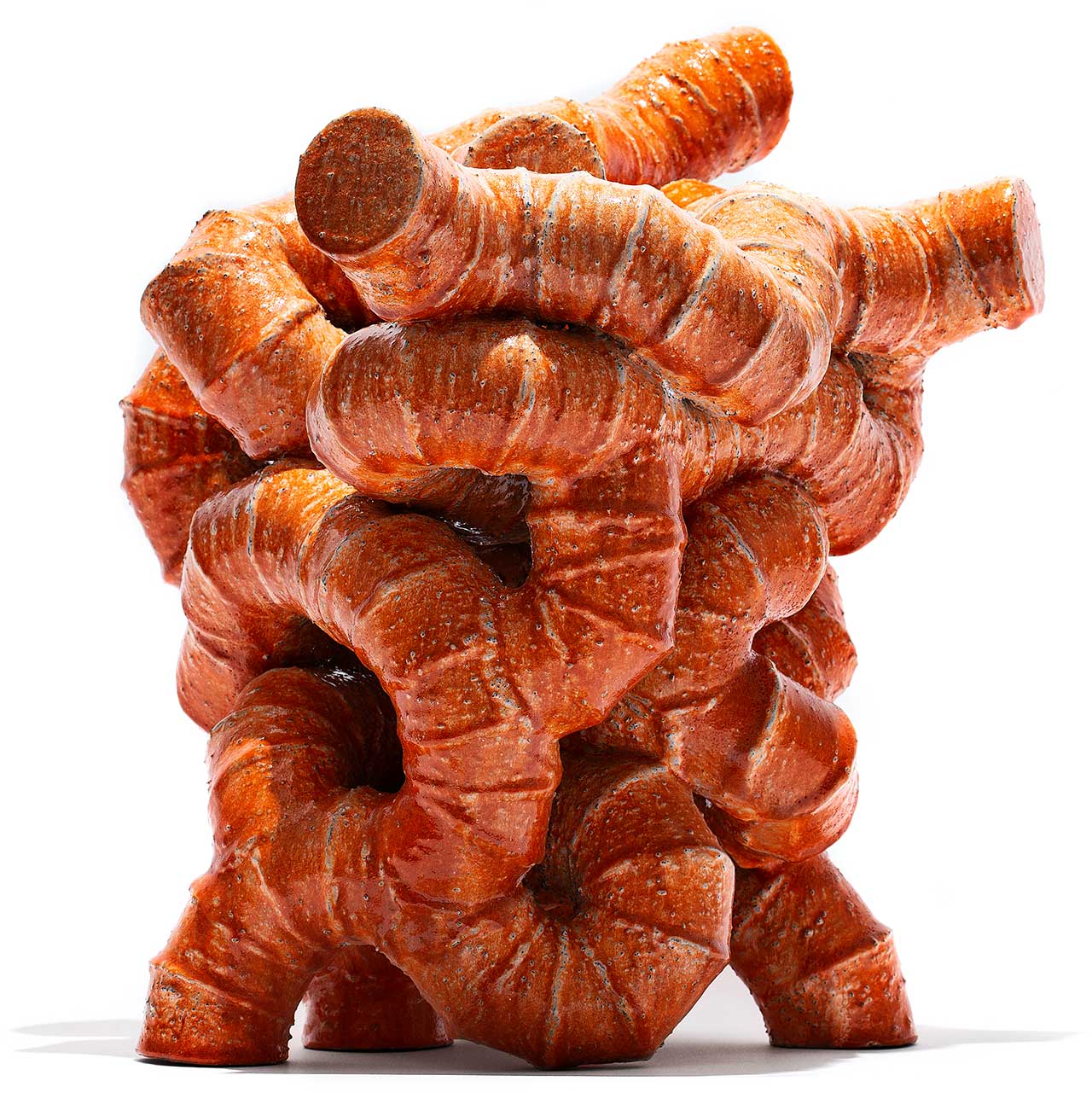 The ceramic works of Martin Bodilsen Kaldahl are dealing with fundamental sculptural existence in space. They are basically non-narrative but strongly emphasize the capacity of the form itself to transfer emotional content to the viewer. Through a precise formal elaboration of the material the artist attributes significance to even the most casual and simple gesture in space and with a vigilant eye for the monumental within the insignificant, he is working to create the conditions for shaping an intuitive spatial form. It’s an improvisation that resembles the way a musician is freely interpreting a tune.

Kaldahl works from an overall vision of the work, while at the same time making obstacles for himself in order to loose some of his control. Out of numerous pieces of cut clay-tubes he builds parts that are later assembled into larger structures, that rise and fall, randomly dancing and groping their way through space. The sculpturality may seem to grow out of a mental void – a distracted sense. The statements simply exist, but they could easily have looked completely different. They present themselves as pure sculptural movements - like a captured account of the moment.

Through his career Martin Bodilsen Kaldahl has worked with a number of different formal expressions in clay. One recurring theme has been the knot as a spatial figure. He has made series of works, where natural form and cultural construction are juxtaposed – one reflecting the other. His interest lies in the potential of the form to make a direct emotional impact on the viewer. The motif is always clear in its simplicity – you see what you see. But the work simultaneously displays a time-dimension, that underlines the span between the simple starting point and the laboriously achieved end result, thus inscribing the work into a tradition, where the precise elaboration is a self evident precondition. The resulting sculptural expression powerfully communicates energy and freshness.

Martin Bodilsen Kaldahl continually experiments and challenges his own ability and understanding of the surrounding world. Through his non-narrative approach he allows the form’s own statement and potential to influence and initiate feeling to stand out in a clear and easily decipherable expression which remains open to many different interpretations and experiences. His often spartan use of materials underpins this. The works are either unglazed with an elaborated textural surface that emphasises the rhythmical sequence  in the form, or with strong clear colours that add a more insistent dynamism and energy  to the works.

Martin Bodilsen Kaldahl held a part –time position as associate professor from 2009 – 2020 at  at KADK, The Royal Danish Academy, Schools of Architecture, Design and Conservation. Now associated as emeritus. In 2011 he was co-initiator of the exhibition platform, Copenhagen Ceramics, with  gallery activities in Copenhagen from 2012-14 and since curating of several large exhibitions in Denmark and abroad.                              ( www.copenhagenceramics.com ).